These are organised by Bob Daubeney on the second Wednesday evening of every January, May and September in The George, a really nice pub just a few minutes walk from the ferry and railway station.

Next one should be 8th September 2021. Can't really see there being one in May.

It is with deep regret we inform you that Al Baker has 'Crossed the Bar'. Al joined in Cooke Division and subsequently went on to HMS Caledonia. Lately he had been living with his family in Southampton.

Photograph of Finalists in the '7 a Side' Competition.

Photographs from the assault course in HMS Raleigh. Again, they're not great quality but some of the faces are easier to see in these ones. Looks like Bennett and Cooke.

In 2022 the Society is celebrating 150 years since its founding. A special one-off event will take place in the form of a Gala Dinner to be held at a location TBC during that year. As happened for Artificer150 back in May 2018, there is a dedicated web page on this RNEBS 150 web site set up for expressions of interest, likely venues, menus, costs, table layouts etc.

For RNEBS members, please email Mark Stevens at rnebs150@gmail.com with your name and class number to register an expression of interest. Click HERE to see who has already registered.

Hope that you are all keeping well and staying safe.

Gives me great pleasure to welcome Reg Elsworth back to the fold today - you may know him as Keith. See Messages board where Keith has made an entry.

Photographs from the assault course in HMS Raleigh. Not great quality unfortunately but colour! 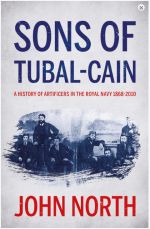 A Book by John North, originally in Lane Division.

Sons of Tubal Cain is a comprehensive history of the evolution of Artificers in the Royal Navy from the introduction of the Engine Room Artificer in 1868 right through to the last class of Artificers to Pass Out from HMS Sultan in 2010. Told with anecdotes, memories and all sorts of stories from Artificers themselves in both war and peace, the book is narrated with humour and affection on the author's part, as he was himself as an Artificer.

There are many contributions from retired Artificers, serving Artificers and also from relatives of Artificers, going back as far as 1871, with many memories that show how engineering in the Royal Navy changed and what it required of its highly trained personnel during the past 150 years. The foreword has been supplied by the Chief Naval Engineer Officer, Rear Admiral Rick Thompson CBE.

The book is available from Troubador Publishing.

John joined the Royal Navy as an Artificer Apprentice in 1967 at HMS Fisgard, (S61 - Lane Division) originally as an Ordnance Electrical Artificer eventually retiring in 2001 as a Warrant Officer Marine Engineering Artificer (Electrical). He served in a variety of ships, from HMS Albion, HMS Exmouth, HMY Britannia, HMS Arrow, to HMS Antrim in the Falklands War, HMS Brazen and finally in HMS Illustrious.

On shore he served with Flag Officer Sea Training in both Portland and Plymouth, the final years of his service were spent in MOD at Foxhill. Starting academic study rather late in life he has a BSc in Mathematics and Applied Physics and since retirement in 2006 has gained a BA (Hons) in History, both with the Open University and a Masters Degree in Naval History with the University of Portsmouth.

Photograph from an S61 meet-up in The George on Queen Street in Portsmouth, 8 May 2019.

Photograph of part of Bennett Division at the Passing In Parade.

Photographs from an S61 meet-up in The George on Queen Street in Portsmouth, 9 January 2019.

I was very sorry to hear yesterday that Andy Blagg Crossed the Bar in November 2018.

See Messages board for a post by Mike Batho.

This photograph was taken when he was in Cooke Division.

Today I received the very sad news that Jan Temme Crossed the Bar just before Christmas. Jan was in Lane Division in Fisgard and went to Collingwood to train as a CEA. He left the Service in 1991.

His wife Liz asks that we don't contact her in the short term whilst his family come to terms with their loss.

His funeral will take place at Efford Crematorium, Efford Road, Plymouth PL3 6NG at 13:15 on Friday 11th of January and there will be a wake at Plymstock Bowling Club, 69 Furzehatt Rd, Plymouth PL9 8QY.

He doesn't want a fuss, no flowers and for everyone to wear something that is comfortable. Any colour you feel as black is not obligatory!

This photograph was taken in 1971 when Jan was serving on HMS Aurora with Al Witt in Singapore.

It is with great regret that I must inform you that John Smissen Crossed the Bar on 16 Nov 18, following a recent diagnosis with lung cancer.

There is currently a book being written by John North, who was a 1967 entry Tiff and classmate of WO Pete Bellamy, the FISGARD WOMEA in the early 90's, documenting the history of Artificers across their century and a half of existence.

See Messages board for more on this from Pincher Martin.

51 Years! Happy Anniversary! I hope you're all well.

It is with great regret that I must inform you that Mike (aka Mick or Shonk) Hartley Crossed the Bar on 2 August 2018 following a long battle with cancer.

His funeral took place in Sunderland on 22 August 2018.

See Messages board for a report posted by Ken Morrison.

Saw this on the HMS Collingwood Facebook page today.

By way of introduction I am Pete Simpson and am currently serving as the OiC of Triumph Squadron at HMS Raleigh which you may well remember as the 'Fire School'. I joined the RN as an Artificer Apprentice in 1986 and whilst I didn?t serve in HMS Fisgard or HMS Caledonia I am very proud of my Artificer training.

As you may know, the Government has marked 2018 as the Year of Engineering and the RN is playing it's part in this in many ways. As the majority of Naval Engineering ratings since WW2 commenced their careers in Torpoint either in Fisgard or Raleigh then it is only right that we here play our part. To that end on 28 September we will be holding an open day for RN Engineers past and present who joined up in Torpoint. The day will involve a tour of the present Phase 1 training site, a buffet lunch in the WO & SR mess followed by witnessing the Passing Out of a large number of Engineering Technicians. It is also hoped that we will be able to mark the day with the refurbishment and return to Torpoint of the Fisgard Clock which is currently in storage in the dockyard.

Would you be able to help me publicise this event amongst your members by announcing it on your website and within your magazine? If possible, can I humbly ask if your association would be able to make a donation towards the refurbishment of the clock? We have already secured some funding for this but still have some way to go in order to be able to achieve our aim.

I received the sad news today that Pete Ough, formerly of Bennett crossed the bar recently.

Pete was in S62A and left the service whilst at Collingwood and my information is that he had been suffering from cancer.

He is second from the left in the bottom row in this photograph.

Profile update for Simon Dyer on the Lane page.

Profile update for John Miller on the Frew page.

Photographs from an S61 meet-up in The George on Queen Street in Portsmouth, 10 January 2018.

POSTSCRIPT: The thumbnail image on the left is John Shields. Sadly, John passed away suddenly on March 26th. It's not going to be the same without you John, we'll all miss you.

Got this in an email from Ken Morrison yesterday.

Our very own Bob Daubeney will appear on the 'Celebrity Antiques Road Trip', BBC2 at 1900 on Thursday 30th November.

I believe that this was filmed on board HMS WARRIOR a few weeks before the organisation's reorganisation made him redundant!

Photographs taken by Mike Batho at the 50th Anniversary Reunion

Photographs taken by John Parker at the 50th Anniversary Reunion

Photographs taken by Gordon Morris at the 50th Anniversary Reunion in Portsmouth.

Photos from the Golden Anniversary reunion are now available on the Purple & Grey Empire web site at www.s61.org.uk/2017.html. There are also photos from the 2017 Army/Navy rugby lunch on the same page.

Photograph taken in the Royal Festival Hall, LONDON, 15th May 2017.

Ray Ashby was awarded The Honorary Degree, Bachelor of Education.

I received this interesting email a few days ago and with Allans permission have reproduced it here. I've also invited Allan to come along to one of the Wednesday meet ups in The George so you never know - shipmates yet!!

I came across your website a couple of years ago and have finally got around to making contact! My name is Allan Bouckley and I was scheduled to join HMS Fisgard on 11th September 1967............

I was a Sea Cadet and wanted very much to join the RN as an Artificer Apprentice. I went through all the selection procedure and had been accepted subject to "O" level results. My problem was that my parents were dead against me joining and made me promise not to leave school without good "O" levels.

I failed maths during the summer exams so postponed Fisgard and returned to retake and pass maths in November. Looking back, the moment was lost. By then, more parental pressure resulted in me joining P and O as an engineer apprentice.

I spent two years at Southampton (OND), one year at sea then a final year workshop trading. I qualified as a Junior Engineer and spent 7 months on the Liner Oriana before transferring to Overseas Containers Limited. I then spent the next 12 years on Container Ships to Australia, NZ and the Far East. I left in 1985.

I had a good career but many times wondered what might have been. My heart really had been with the RN. It would be good to hear from you and perhaps swap experiences and maybe even make a mate in the other Navy!

Photograph from an S61 meet-up in The George on Queen Street in Portsmouth, 11 February 2017 to discuss the forthcoming 50th Anniversary Reunion.

Had an email from Glenn Mackie who tells me that the missing name on this photo of S62A on HMS Aveley is him, sitting right at the back.

Thanks for that Glenn - another piece of the jigsaw!

CALEDONIA OLD BOYS' 2016 MINI-REUNION: The Report of Proceedings for the reunion held at Balloch, Scotland on the weekend of 9-11 September is now available on the Purple & Grey Empire web site at www.s61.org.uk/2016.html

Missing name on the Bennett Class photo is Glyn Gostick! Front row next to Al Witt.

Anyone got the missing photo?

New photographs sent to me by Fritt Belfitt, formerly of Bennett and Collingwood.

TOM TAYLOR HAS 'CROSSED THE BAR'

I am informed by Ken Morrison that Tom Taylor 'Crossed the Bar' this morning, Sunday 1st May 2016 and draw your attention to the messages board.

Tom was originally in Bennett Division.

Some reunion photographs of Greenie Waffoos from Roy Lusted.

Finally, some news!! Had an email from Al Witt, formerly Bennett and Collingwood REA.

He's just found the site for the first time and tells me he is retired now and living in Ferndown. If anyone would like his email address, drop me a line and I'll pass it on.

Received an email from Bob Daubeney this week with the sad news that Pete Jakeman lost his life whilst on holiday in Derbyshire on the 14th May.

Pete was in Cooke Division with me and I remember him well.

There is a report HERE